Amy and Steve give insight into competing for your country.

How did you start in triathlon?

Amy: I did my first triathlon two years ago at our local race, Tonbridge. My husband and brother in law had decided to set themselves a new challenge and I did not want to be left out so I signed up too!

Steven: After 5 years of inactivity in my forties decided I would try to get back to fitness. Having started a number of exercise classes and work with a personal trainer, Stephen Harper an of the cuff comment one day was that he was thinking of doing a local Sprint Triathlon “The Orc”. Not really knowing anything about Triathlon I jumped in with both feet. This was my start into a sport that has led to hours of fun but more importantly to meeting loads of lovely people who are now friends.

Did you have a background in any other sport first?

Amy: Not particularly – I played all the usual sports at school but then through uni etc it all fell to the way side. I started running for the first time after having my second child in 2015, nothing serious – a few muddy runs and half marathons. I had never been on a road bike and bought myself a cheap starter bike a few months before doing my first triathlon.

Steven: All through my early years I played Football and Cricket for various clubs and always enjoyed all sports and liked to give them all a try.

How much training do you do per week?

Amy: I train six days a week. My week usually includes three bike sessions, three run sessions, a brick session and two gym sessions. I also teach Pilates so I get lots of stretching done as part of my job! I’ve not been swimming recently as I’m training for a duathlon but will hopefully find some time to squeeze some swims in over the summer too.

Steven: Training now is between 9 -15 hours a week.

What is your favourite workout?

Amy: The bike is my strongest discipline. A lot of my sessions recently have been very structured and therefore indoors on a turbo trainer following a set programme but nothing beats getting outdoors on the bike on a summers day. A hard run session on the track can be equally as rewarding.

Steven: I love swimming, but more recently I have found the joys and benefits of Interval training which have garnered great results in terms of strength, endurance and speed. 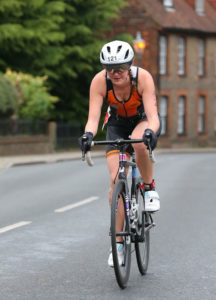 What other responsibilities do you have, and how do you fit in your training?

Amy: I have two small children and run my own business so I have to be clever/creative about when to train and stick to a routine where possible. The bulk of my training gets done in the evenings once the children are in bed but I will often squeeze in shorter sessions in lunch breaks and in between clients if I can. I also try and make the children part of my training if possible such as taking my son for a bike ride whilst I’m running. Both kids also love going to the track and running their own races whilst I’m training. I am lucky to have an extremely supportive husband who helps me a lot with organising the rest of family life.

Steven: Family life is very important I have my wife Helen and  three children 23, 22 and 18 and although they are not around as much it’s important that I limit the impact my training time has on everyone. To that end I commute to London on my bike and am lucky enough to have access to a pool at lunchtime. Also Helen and I love open water swimming in the lakes around Tunbridge Wells.

What do you enjoy most about the sport?

Amy: The diversity  – not one triathlon is the same. Different distances, types of course, level of competition and so on. There is always a new and completely different challenge around the corner and it never gets boring. A real cliche, but I also love the new friends it has made me – our club is full of wonderful, supportive, like-minded people who understand the highs, lows, challenges of fitting in training and also (most importantly) having a life at the same time!

Steven: The camaraderie is second to none, the support, advice laughs I have had with my friends in TWTC and the encouragement to step out of my comfort zone to achieve things I did not think possible.

What aspect of the sport do you wish you could be better at?

Amy: I have worked really hard in the last few months on improving my running speed over shorter distances ready for this race. I spent last year doing long distance races and my running slowed down a lot (not that it was ever particularly fast in the first place!) – biking seems to come naturally but I have to keep plugging hard at my run to get the times down.

Steven: Running, I was a sprinter in my younger days and still wish I could run the longer distances at the pace I see my team mates running, they all make it look so easy where I feel like I’ve got lead in my boots sometimes.

Are you coached/self coached, why did you go that particular route?

Amy: I have been incredibly lucky to have had the help of my club president, Eric, in preparation for this race. I didn’t expect the level of help he has given me when I posted on our club Facebook page asking if anyone had any good training plans. Eric said he could help me and it went from there – he has been fantastic. The structured training tailored to me and my routine, and someone to make me accountable at the end of each week, has had a massive impact on my training.

Steven: I started by self coaching with help from the club, however as I have wanted to achieve a little more I have engaged with a coach that I met at the European championships. Roy at TriSpoke now provides one to one help and a fully managed weekly training plan.

When did you realise that being able to qualify and represent your country was a possibility? What was the qualification process? Did you change your training once you qualified?

Amy: I had arrived home from completing a Half Iron man and sat down to find my new challenge. The training for the half iron took an awful lot of hours so I wanted to go back down in distance but something that would still challenge me. I had seen other members of the club compete in Age Group competitions and so had a look on the website as a bit of a whim. I found a listing for a duathlon qualifier (which suited me as swimming is not my favourite part of a triathlon!) and thought I had nothing to lose. To qualify you have to race in a selected race and achieve a qualifying time. I had nothing to lose but genuinely didn’t think that I would even come close to qualifying. My training prior to this (and up to the qualifier) was very sporadic, unstructured and a bit random – I never felt it was as productive as it could be. After qualifying Eric has helped me (see above).

Steven: Lloyd, a fellow member at TWTC brought it to my attention that the European Aquabike Championships were open to qualify and that I should have a look at it. Prior to this I assumed it to be a pipe dream, but Lloyd assured me that I had a chance. You had to submit Swim and Bike times for a recognised Long Course event and then if they were in the qualifying time and you were in the top 20 you would be selected. Having put in my Bolton Ironman Times and my Holkham Half Ironman times a nervous wait ensued. When the email arrived from British Triathlon I can honestly say I have never been so made up. Once I qualified the enormity of it hit me and I ramped up specific swim and bike training to match the coarse and also engaged with club members for advice.

What would you say to someone who was thinking of giving triathlon a go for the first time? What advice would you offer?

Amy: My experience of triathlon is that it is an incredibly supportive sport, no one is judging you and everyone is there to help you. You can take it as seriously as you want to, you don’t need all the fancy gear to give it a go. It’s a great challenge and one that you will be pleased you did.

Steven: Do it, it is so much fun and crossing the line for the first or the thirty first time still gives you such a great feeling of accomplishment. Join a club and come along to the sessions like the Swim and bike rides as these are where you’ll meet people and realise that you are capable of anything you put your mind to. 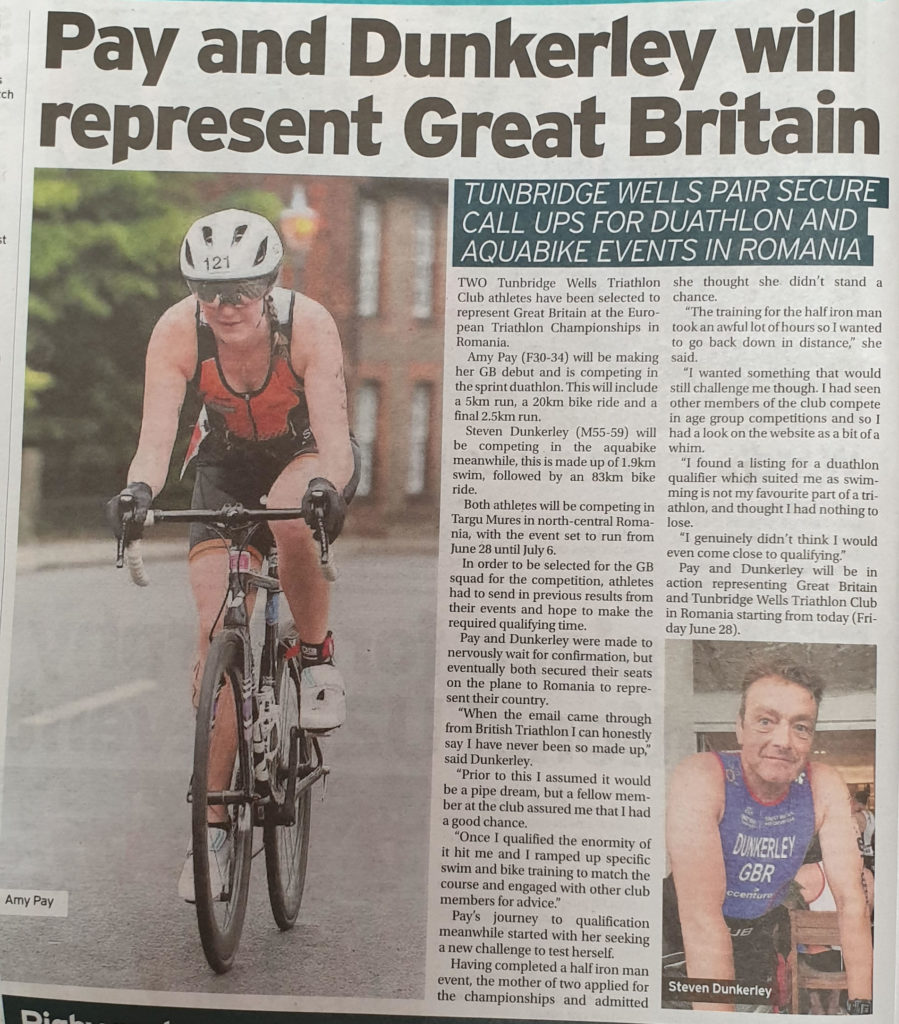